The United States Men's Soccer team and its fans rejoiced as the US clinched its 7th straight appearance (the 7th longest streak in the world) in the World Cup. The team helped clinch their right to play against the world in Brazil by beating down Mexico 2-0 in front of a frantic home crowd in Columbus, Ohio. The victory was led by Eddie Johnson who scored the games first goal on a header from a corner kick. The nail in the coffin for Mexico was Landon Donovan scoring another goal in the 78th minute, putting the US up 2-0 -- the victory put the US in first place (5-2-1) in the North and Central American and Caribbean finals with 16 points -- the top three teams automatically qualify for the World Cup. 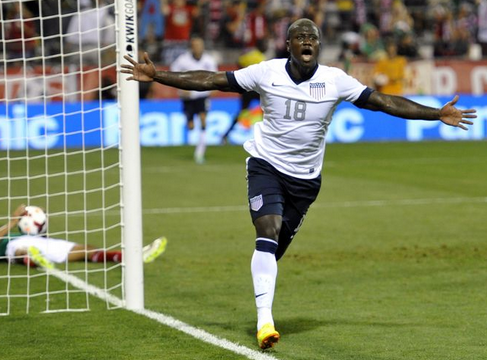 But the US had to wait a half an hour after the conclusion of their match to know they were into the 32 team World Cup tournament next summer -- Honduras held a 2-2 tie with Panama which guaranteed the US one of those top 3 spots with still 2 qualifying games left to play. "Obviously this is a huge, huge evening for all of us," U.S. coach Jurgen Klinsmann said. "It's a huge milestone whenever you make it to a World Cup." This win is just a small step for the US Men's Soccer team. Qualifying isn't the goal, nor should getting past the group stage (the US made it past the group stage in 2010 but lost to Ghana in their first elimination game) -- this team should be poised to make a run in the tournament, hopefully a deep one to let the world know US soccer is here to stay. Soccer fans are less than one year away from the world's biggest sporting event, and the teams competing for that golden trophy are starting to fall into place. Image via USA Today
Tags: Sports, World Cup