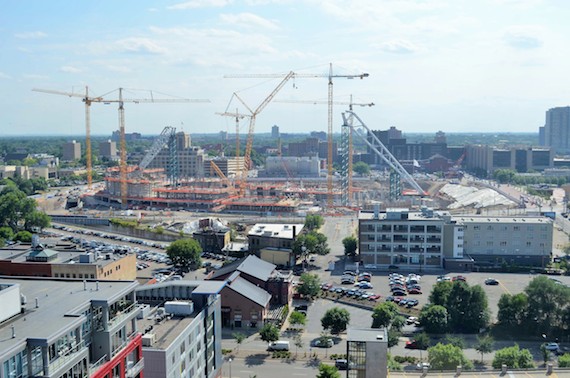 The Vikings’ future venue, for now known only as the New Minnesota Stadium, is making progress while the Vikings are playing their first games in TCF Bank Stadium. The steel structure of the 2018 Super Bowl host-venue has just started to make progress, spanning the entirety of the stadium’s footprint from east to west. With the world’s third largest crane on site to help, 11.6% of construction on the 1.75 million square foot complex is complete, according to the team.

“It’s amazing when you look at the site, you can see how much construction has already happened,” says Minnesota Sports Facilities Authority chair Michele Kelm-Helgen via the team’s website. “You actually can see the concourse you’re going to walk in on when you’re back on 11th Avenue. You can kind of picture yourself already standing in the stadium.”

Recently, Vikings ownership toured the stadium construction site and were excited about the headway that workers have made. During the All-Star game, 17 Major League Baseball team representatives also toured the preview center that is accessible to season ticket holders. Driving by the stadium site each week, I can easily see the progress that is being made by Mortenson Construction even though I sometimes still expect to see a white, pillowy dome. The stadium is scheduled to open July 15, 2016 while only seven months ago the Vikings were playing at the same area in the Metrodome. You can watch a live stream of the construction here. It's also worth noting that NCAA officials traveled to the area to check out the Twin Cities' bid to host future NCAA Men's Final Four tournament games between 2017-2020. The Twin Cities made it into the final eight finalists, with four of those cities chosen in November to host the tournament's games in those four years.   Photo courtesy of the Vikings
Tags: News, Local Happenings, Minnesota Vikings, New VIkings Stadium