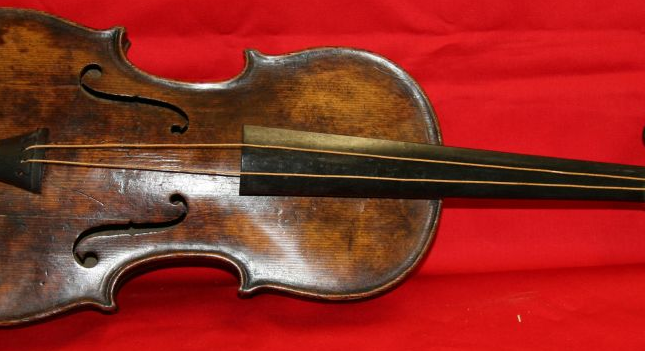 Almost everyone knows about the sinking of the RMS Titanic -- whether it be from reading the history books or watching the uber-successful James Cameron film, almost everyone knows the somber tale. The famous "unsinkable" ocean liner sunk on her maiden voyage on April 14, 1912. On her way to the bottom of the ocean, the story goes that four musicians stood on her decks and played music until Titanic vanished beneath the ocean's surface. In the following search and rescue a week after the sinking, one of the instruments of those brave musicians was found at sea -- the violin of bandmaster Wallace Hartley was reportedly found with his body, a true testament to this musicians love for music. Now, in 2013, the violin with Hartley's name on it was auctioned off Saturday in England, selling for $1.45 million (it was initially reported to have sold at $1.6 million). Although the violin is now unplayable, it clearly is a piece of maritime history. The violin underwent rigorous tests to ensure its authenticity, and it was proven beyond a reasonable doubt to belong to Hartley. Though the item sold higher than anticipated, it is clear why a collector would want to own this piece of history. The collector who won the item bid over the phone and wished to remain anonymous. I have always loved the sad tale of the Titanic -- but even if I had $1.45 million just sitting around, I don't think I could pull the trigger to buy this piece of history. I'll just stick to my history books and my Blu-ray copy of Titanic to get the "full experience." Image via: Associated Press