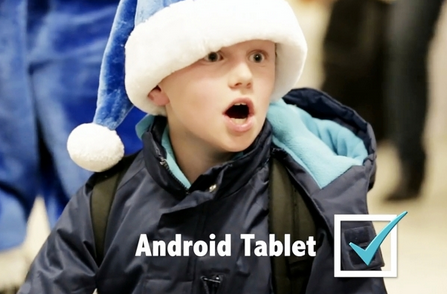 This is one of the best executed advertisements I've seen in a long time -- not only is it extremely well-produced and planned, but it's one of those feel-good advertisements that works as more than just a way to promote West Jet. Of course, this ad was made for more than just making the holiday season bright. The positive spin for West Jet is more than worth the costs of producing the ad, because promotions like this are worth spreading. And judging from my Facebook/Twitter feed the past few hours of people sharing the ad, others feel the same way. Check it out. Pretty good right? It has that affecting pull and real emotions from real travelers to make the advertisement work so well. It makes viewers feel happy to see these West Jet patrons get their Christmas wishes -- it also makes us have a favorable impression of West Jet moving forward -- marketing! My only gripe is I feel bad for the guy who said he wanted socks and underwear, after the fact realizing he could have asked for a thousand dollar television. What if someone asked for a car? Then what West Jet? All in all, West Jet and their marketing team deserve a huge nod for not only making their travelers' day brighter, but for crafting such a heart-warming advertisement. Photo via: West Jet