Advertised simply as, “The ultimate near-death experience,” it’s hard to glean much information about what The 99 actually is. On the surface, it almost seems like another ‘haunted’ festival in the spirit of Halloween, like Shakopee’s Trail of Terror, or even ValleySCARE. The bloody letters coupled with the black and grey image of a woman smiling sinisterly gives the impression of somewhere someone would go to get the wits scared out of them. However, the purpose of The 99 isn’t to inspire the typical Halloween-time scare, but rather a religious scare. In the style of medieval Christianity, the core message of The 99 is that the choices of young people will lead them to Hell, and that’s what they deserve. The first few rooms of The 99 are effective. The scenes depicted of various causes of death inspire nervousness in the viewer. The accompaniment of a "spirit guide" in the guise of the grim reaper, fog machines, and strobe lights, all add to the effect of uneasiness. If the purpose had been to inspire the desire to be safe and to appreciate life and its comforts, the purpose would have been achieved. However, after being led through these rooms, one finds themselves in Hell itself. With a soul in the center of the room being tormented by demons, Satan gloats about his possession of many souls, saying, “This is what you wanted, isn’t it?” It is at this point that The 99 loses its non-religious visitors. I personally couldn’t help but roll my eyes at the speech given by the Devil, about how we have no choice but to end up in his kingdom. It felt as though the 1500’s had returned, in which the prime tactic of religion was to preach hellfire and terrify people into submission. 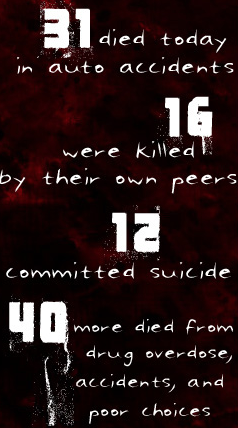 The show got even cheesier when a voice commanded, “Come into the light,” and a white light appeared, leading viewers into the next room while Satan begs us to stay in hell. Behind the light is Christ in the process of Crucifixion. A voice-over describes God’s sacrifice of his only son in order to save the sinner from the certainty of Hell. At this point, the purpose and message is astoundingly clear. The point has been hammered home entirely. However, that isn’t enough for The 99. Again, we are shuffled into the last room, where a pastor is waiting. The pastor again gives the message of the previous voice-over, saying “Because of Jesus’ sacrifice, Hell is not our only option.” He concludes his message with a prayer, saying that whoever follows along with the prayer will henceforth be 'Saved,' and by accepting Christ you will avoid the torment of Hell. Even as a Christian that has already made such a prayer years ago, I felt pressured into doing this. They made it seem as though if you didn’t follow along, you were ensuring an eternity of Hell for yourself. After this, a large group of people waits for you to exit the show. Each of these people are seated at a small table with a single empty chair. Immediately they pounce, forcing you to sit down and talk to them about the show, whether you belong to a church, and how it feels to be ‘Saved.’ This portion was extraordinarily uncomfortable for anyone who isn’t extremely extroverted. They also have information cards to fill out, and immediately ask you to do so. Needless to say, I was glad to get out of there. The 99 definitely isn’t for everyone. In fact, I’d say that unless you are extremely religious, extroverted, and don’t mind seeing death re-enacted, The 99 isn’t for you. If you do fit these criteria, The 99 is open in Lakeville, Friday-Sunday, 7 pm – 11 pm, until November 3rd. For more information, visit their website. Images via: The 99
Tags: Events, The 99