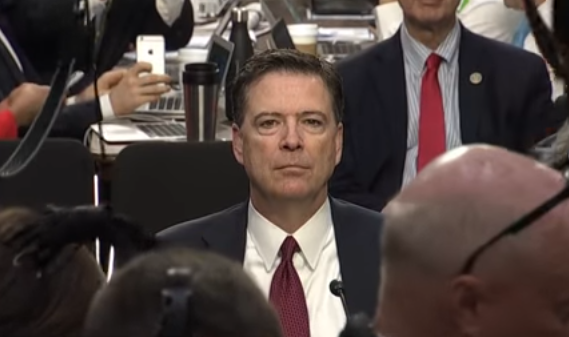 Last Thursday, a reported 19.5 million people watched former FBI Director James Comey's testimony to the U.S. Senate Intelligence Committee on television. For context, this huge viewership number is roughly equivalent with this year's NBA Finals, which have been among the most watched games in league history. (The 19.5 million viewers of the Senate hearing doesn't include those who watched via live stream online. At their desks. At work. Like I did.) The day before this Superbowl-like spectacle of Senate hearings kicked off, Comey released a 7-page written statement to set the stage for the next day and act as the basis for inquiry for the panel of Senate leadership. In response to Comey, Trump's personal lawyer Marc Kasowitz made a statement on Thursday afternoon disputing some key parts of the former FBI Director's testimony (while also affirming some of what Comey said). Then, on Friday afternoon during a joint press conference with the Romanian President in the White House rose garden, in response to a question from a reporter, Trump directly (and rather defiantly) disputed Comey's testimony, adding he was "100%" ready to testify under oath to his side of the story. Whoa. The sitting U.S. President and the former FBI Director he fired just last month are offering contradicting accounts of their one-on-one meetings which seem impossible to reconcile. Here is a summary of what's been said by each side so far:

From James Comey's June 7th written testimony regarding a January 27 dinner in the Green Room at the White House with President Trump:

"My instincts told me that the one-on-one setting, and the pretense that this was our first discussion about my position, meant the dinner was, at least in part, an effort to have me ask for my job and create some sort of patronage relationship. That concerned me greatly, given the FBI's traditionally independent status in the executive branch. I replied that I loved my work and intended to stay and serve out my ten-year term as Director. And then, because the set-up made me uneasy, I added that I was not "reliable" in the way politicians use that word, but he could always count on me to tell him the truth. I added that I was not on anybody's side politically and could not be counted on in the traditional political sense, a stance I said was in his best interest as the President. "A few moments later, the President said, "I need loyalty, I expect loyalty." I didn't move, speak, or change my facial expression in any way during the awkward silence that followed. We simply looked at each other in silence. The conversation then moved on, but he returned to the subject near the end of our dinner. At one point, I explained why it was so important that the FBI and the Department of Justice be independent of the White House. I said it was a paradox: Throughout history, some Presidents have decided that because "problems" come from Justice, they should try to hold the Department close. But blurring those boundaries ultimately makes the problems worse by undermining public trust in the institutions and their work. "Near the end of our dinner, the President returned to the subject of my job, saying he was very glad I wanted to stay, adding that he had heard great things about me from Jim Mattis, Jeff Sessions, and many others. He then said, "I need loyalty." I replied, "You will always get honesty from me." He paused and then said, "That's what I want, honest loyalty." I paused, and then said, "You will get that from me." As I wrote in the memo I created immediately after the dinner, it is possible we understood the phrase "honest loyalty" differently, but I decided it wouldn't be productive to push it further. The term -- honest loyalty -- had helped end a very awkward conversation and my explanations had made clear what he should expect."

From James Comey's June 7th written testimony regarding a February 14th meeting between he and Trump at the Oval Office:

"When the door by the grandfather clock closed, and we were alone, the President began by saying, "I want to talk about Mike Flynn." Flynn had resigned the previous day. The President began by saying Flynn hadn't done anything wrong in speaking with the Russians, but he had to let him go because he had misled the Vice President. He added that he had other concerns about Flynn, which he did not then specify. "The President then made a long series of comments about the problem with leaks of classified information -- a concern I shared and still share. After he had spoken for a few minutes about leaks, Reince Priebus leaned in through the door by the grandfather clock and I could see a group of people waiting behind him. The President waved at him to close the door, saying he would be done shortly. The door closed. "The President then returned to the topic of Mike Flynn, saying, "He is a good guy and has been through a lot." He repeated that Flynn hadn't done anything wrong on his calls with the Russians, but had misled the Vice President. He then said, "I hope you can see your way clear to letting this go, to letting Flynn go. He is a good guy. I hope you can let this go." I replied only that "he is a good guy." (In fact, I had a positive experience dealing with Mike Flynn when he was a colleague as Director of the Defense Intelligence Agency at the beginning of my term at FBI.) I did not say I would "let this go." 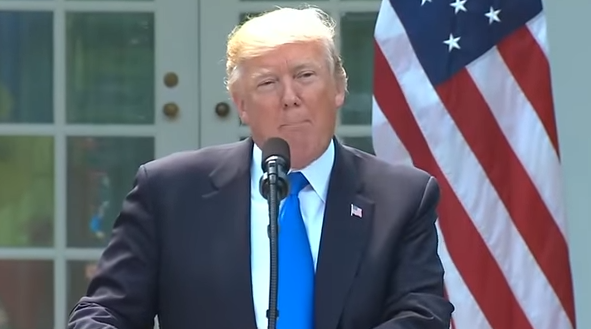 President Trump at a joint press conference with the Romanian President Klaus Iohannis in the White House Rose Garden on Friday, June 9:

ABC reporter Jon Karl: "Mr. President, I want to get back to James Comey's testimony. You suggested he didn't tell the truth in everything he said. He did say under oath that you told him to 'let the Flynn'... you said 'you hoped the Flynn investigation... he could let go'... President Trump: "I didn’t say that." Karl: "So he lied about that?" Trump: "Well, I didn't say that. I will tell you, I didn't say that." Karl: And did he ask you to pledge... Trump: And there would be nothing wrong if I did say it according to everybody that I read today but I did not say that. Karl: And did he ask you for a pledge of loyalty from you? Trump: No, he did not. Karl: So he said those things under oath. Would you be willing to speak under oath and give your version of... Trump: 100 percent. I hardly know the man. I'm not going to say 'I want you to pledge allegiance'. Who would do that? Who would ask a man to pledge allegiance under oath? Think of that. I hardly know the man. It doesn't make sense. I didn't say that and I didn't say the other. Karl: So if Robert Mueller wanted to speak with you... Trump: I'd be happy to tell you what I just told you.

"Mr Comey's testimony also makes clear that the President never sought to impede the investigation into attempted Russian interference in the 2016 election, and in fact, according to Mr. Comey, the President told Mr. Comey "it would be good to find out" in that investigation if there were "some 'satellite' associates of his who did something wrong." And he did not exclude anyone from that statement." "Consistent with that statement, the President never, in form or substance, directed or suggested that Mr. Comey stop investigating anyone, including suggesting that that Mr. Comey"let Flynn go." As he publicly stated the next day, he did say to Mr. Comey, "General Flynn is a good guy, he has been through a lot" and also "asked how is General Flynn is doing..." "...The President also never told Mr. Comey, "I need loyalty, I expect loyalty" in form or substance. Of course, the Office of the President is entitled to expect loyalty from those who are serving in an administration, and, from before this President took office to this day, it is overwhelmingly clear that there have been and continue to be those in government who are actively attempting to undermine this administration with selective and illegal leaks of classified information and privileged communications."

And so, there it is. In multi-colored contrast. He said. He said. Comey v. Trump. One man's word set directly against another. 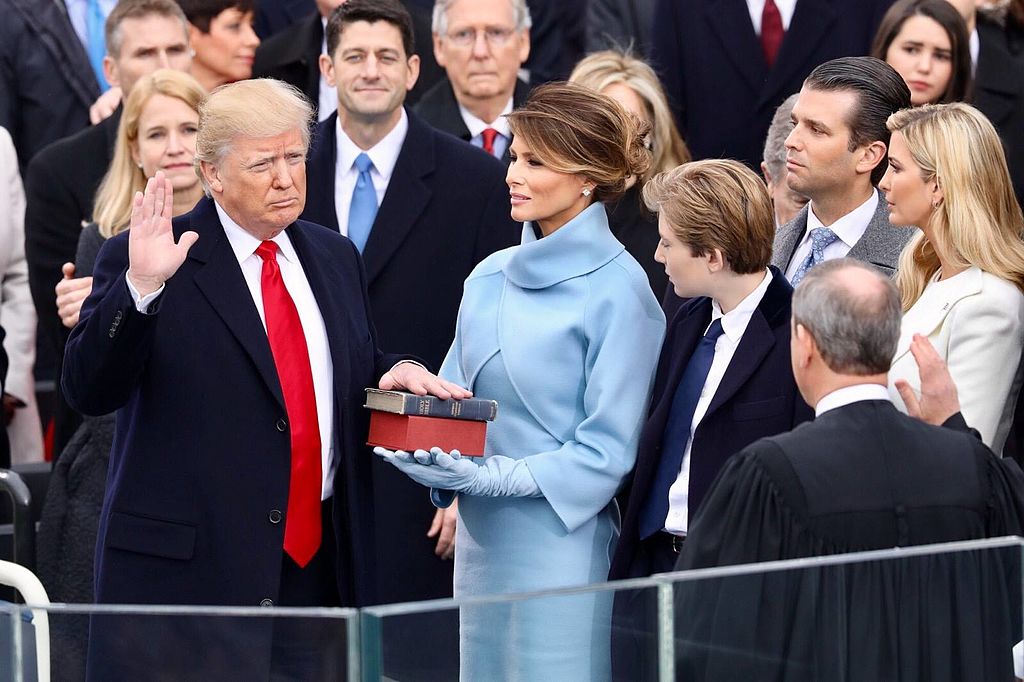 Leave Russia aside for a minute. Assume there was no cooperation or collusion between Trump's team and any foreign entity. Leave aside politics, too. Forget about your feelings about Obamacare, Trump's border wall, tax reform, etc. This apparent impasse actually provides us a rather conveniently apolitical moment in which we can use our common sense and intuition to weigh the character of men whose testimonies are mutually exclusive. Focus on these two men, Jim Comey and Donald Trump, and their words. Who do you believe? The former FBI Director, whose voluntary testimony under oath was based on contemporaneous memos he wrote immediately following his meetings with Trump and circulated to numerous high-ranking intelligence members? Or the sitting President, a former reality TV star who championed the Birther movement, insisted on big league inauguration attendance (and an effort by the media to cover it up) despite photographic evidence to the contrary, and suggested a link between Ted Cruz's father and Lee Harvey Oswald just prior the assassination of John F. Kennedy? I know who I believe.     Images via YouTube — Wikipedia
Tags: Politics, Donald Trump, James Comey