If there’s a must-see musical of 2013 in the Twin Cities, it’s this one. The hit musical Wicked flew into Minneapolis on September 18th and I had the privilege of being in the audience last weekend. The play was nothing short of magical. Not a single actor or actress was off key, not a single line was missed; it was exactly what you’d expect from a Broadway original: perfection. The play, based on the Gregory Maguire novel Wicked: The Life and Times of the Wicked Witch of the West, is a prequel to the Wizard of Oz. It follows Glinda and the Wicked Witch of the West (in the play known as Elphaba) through their college years. Who knew that before they were the enemies of Oz, they were roommates? This play is an absolute must-see. Children, teenagers, parents and friends were all gathered at the Orpheum to watch this legendary play. It has something for those who hold the Wizard of Oz near to their heart and even for those who have never seen the movie at all.

Glinda is played by Jenn Gambatese, who does a wonderful job of playing a ditzy, yet lovable, spoiled college student. The young Wicked Witch of the West is played by Alison Luff, who is stunning, even under all of that green paint. The voices and personalities of the two harmonize perfectly throughout the entire play. I was completely blown away by how similar these two sounded to the original actors who played these characters, Idina Menzel and Kristen Chenoweth. It’s no wonder the New York Times called the play “Broadway’s biggest blockbuster.” Wicked was a hit right from the get-go -- according to the musical’s website, www.wickedthemusical.com, the play made over $14 million in just 14 months. By its fourth year in 2007, the musical had garnered about $750 million and had been seen by nearly 10 million people worldwide. 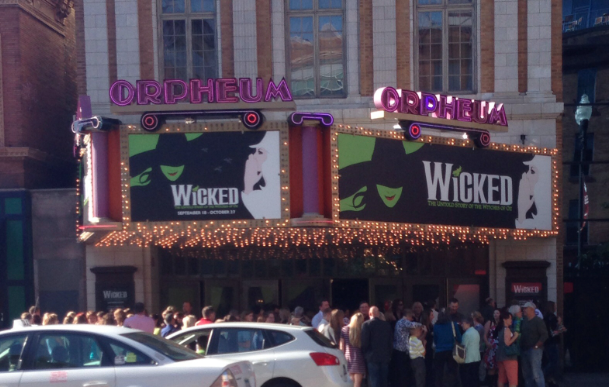 Though the tickets were expensive, as were the beverages, if you’re going to spoil yourself this fall, this is the way to do it. The performance was outstanding and the entire show was truly magnificent; I absolutely loved this play and would see it again and again if I could. Images via: Google and Anne Millerbernd
Tags: Orpheum, Theatre, Wicked