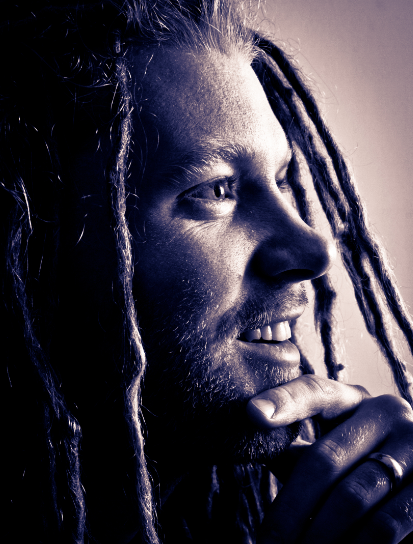 It’s nice having talented and actively performing musicians as friends. They’ve been helping my first awkward steps as a budding music journalist feel less shaky. I reflect on this fact as I sit and talk with my friend and former Rule bandmate Ryan Liestman about his upcoming EP release concert at Bunker’s on February 7th. In a conversation that is one part riffing and one part casual interview, the story behind this show begins to take shape. I first ask Young Ry (as he is known onstage) about the concept behind his EP, Turn off the Gadgets. He tells me that his Sonic Matrimony writing and production partner, Michael Bland, amicably challenged him to compose a focused collection of ten reggae songs. With this creative framework in mind, Liestman set out to answer the challenge. Dabbling in the reggae sub-genres of roots and lovers rock, he wrote a group of pop-friendly reggae tracks (two co-written by Bland) that became this EP. Of course, any pop-friendly record needs to be heard by people -- and all the better in a live setting. He and Bland decided that an EP release show was in order. I bluntly ask Liestman what he hopes to achieve with this concert (other than simply releasing his EP). He tells me there’s no better way to keep up one’s chops as a musical performer than to perform. He also wants to say “I’m here!” to the Twin Cities after a six-year absence from its music scene due to extensive touring with the Jonas Brothers as their keyboardist and backup vocalist. When asked about the show’s promotion efforts, Liestman tells me that his campaign has been relatively small due to the holiday slowdown in the media. He has posted the show’s flyer on Facebook and tweeted here and there. Regardless of the crowd’s size, Liestman states that he wants to “host a party that [he’d] want to go to.” 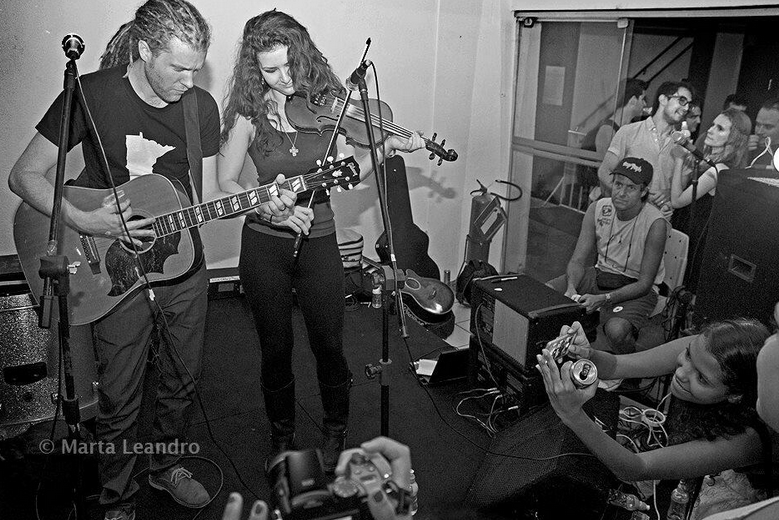 I press the issue further when I ask him if there has been a significant adjustment period going from the enormous stadium concerts he played with the Jonas Brothers to the scaled-down and more intimate shows he has played in Minneapolis recently. Young Ry thinks for a moment and poignantly reveals that a huge crowd can never be a substitute for true musical ownership. But Liestman goes on to say that he certainly learned a lot and grew as a performer touring with the Jonas Brothers. He details the delicate energy balance that he must maintain in order to satisfy an audience. I ask him how he knows if an audience is completely satisfied. He says that if people leave his show wanting more, he has done his job. I prod the issue of showmanship a little more and inquire about musical influences he channels during performances. Young Ry doesn’t mention any specific names. He instead tells me the two mistakes that he consciously tries to avoid while putting on a concert: focusing too much on the technical side of the music and making the experience exclusive rather than inclusive. Liestman wants to create an experience that is as fun (and active) for the audience as it is for him. For his live band, Liestman has been working with a diverse group of talented musicians. Along with Bland on drums, Young Ry’s group consists of Cory Wong (guitar), Elliott Blaufuss (keyboards), Charles Hayes (bass), and Petar Janjic (percussion). I ask how his experience has been with this group of Minneapolis musical heavyweights. Clearly delighting in their involvement with his project, Liestman praises their musicianship and credentials as “consummate professionals.” The band, assembled by Bland and Liestman, will (in different combinations) back other Sonic Matrimony artists on the bill, including Taylor Robert, g’Beau, and Ladyboi. After speaking with him, I can clearly tell that Young Ry is very excited for this concert. As a fellow musician and friend, I’m excited for it too. Having seen other shows of his, I can objectively say that this performance is bound to astound people. The energy, songwriting, vocals, musicianship, musical textures, and live sound mix are all quite out of the ordinary. All that’s left to say is everyone should be a part of this performance. Here are the details: 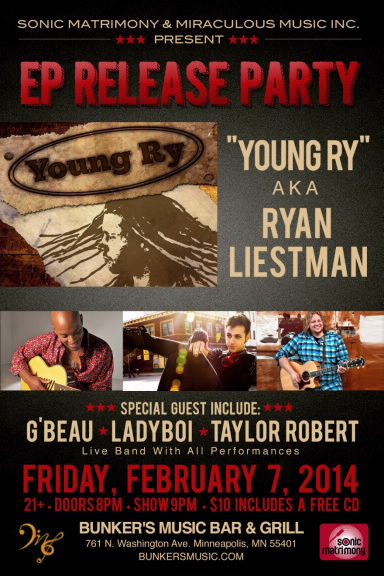